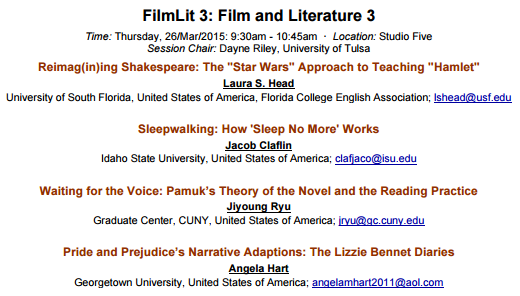 On March 26th, CCT’s Angela Hart was a featured speaker in “Film and Literature,” a program in the College English Association’s 46th Annual Conference: “Imaginations” (new window) held at the Hyatt Regency in Indianapolis, Indiana. Angela’s presentation (new window) was on “Pride and Prejudice’s Narrative Adaptations: The Lizzie Bennet Diaries: The Nineteenth Century Reimagined for the Twenty-first Century.” 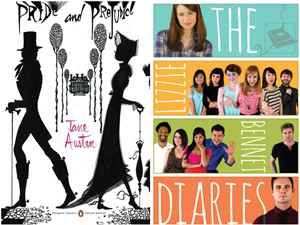 Jane Austen’s classic tale of Pride and Prejudice was successfully adapted in The Lizzie Bennet Diaries, which aired April 9, 2012 to March 28, 2013, consisting of 100 episodes between two and eight minutes in length. The series even won an Emmy for outstanding creative achievement in interactive media. The Lizzie Bennet Diaries utilized a new medium, consisting of short YouTube videos, to convey the story and characters versus a two-hour long feature film or mini-series installments as previously done.

The series was successful with their modern day adaptation because they exhibited the animosity between Elizabeth Bennet and Mr. Darcy, emphasized familial elements, and incorporated Elizabeth’s sense of individuality and intelligence. The Lizzie Bennet Diaries included narrative elements through the steady camera angle, dialogue, and misé-en-scene.

Due to the nature of Pride and Prejudice, this paper pertains to the concept of passage in several ways, such as, adaptations, rites of passage, travel narratives, class mobility, and gender. At this time, Pride and Prejudice has been captured on film in 1938, 1940, 1952, 1957, 1958, 1961, 1967, 1980, 1995, and 2005. There are certain aspects of Elizabeth Bennet’s personality that needs to be included in each portrayal. When creating a story based on Pride and Prejudice, it is important to maintain certain key elements that readers have come to know and love. True Janeites are aware of Elizabeth Bennet’s long walks, which first catch Mr. Darcy’s attention. Thus, interpretations must satisfy their knowledge and desire for a well-executed retelling of the tale.