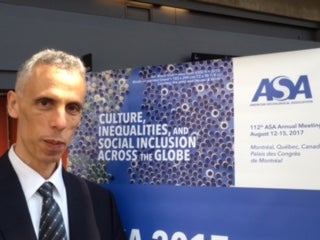 CCT Professor Mohamed Zayani (new window) received the 2017 Communication, Information Technologies, and Media Sociology Book Award from the American Sociological Association during its annual convention in Montréal, Canada, August 12-15, 2017. Based in Washington, DC, the ASA is the largest professional association of sociologists with over 13,000 members. CITAMS, which administers the award, is a vibrant section of the ASA that focuses on the sociology of communication and the social aspects of digital technologies.

Networked Publics and Digital Contention is part of the Oxford Studies in Digital Politics Series. “That Mohamed Zayani’s book has won three awards, from three different associations, attests not just to the impact of his work, but also to its breadth. It’s a great achievement,” said Oxford University Press editor Angela Chnapko. 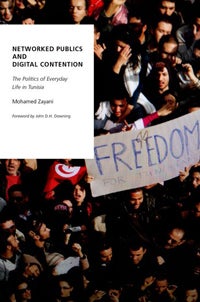 Focused on the Arab uprisings, Networked Publics and Digital Contention examines how digital technologies have impacted political socialization and redefined politics within authoritarian contexts. Based on extensive fieldwork, the book explores how popular everyday forms of politics that are woven into new information technologies and communication habits have enabled networked publics to negotiate agency, reconfigure political action, and reimagine citizenship.

Manuel Castells, Wallis Annenberg Chair of Communication Technology and Society, University of Southern California, described Zayani’s book as “one of the best analyses of the social movements that led to the transformation of the Arab world, and a major contribution to the understanding of social movements of the digital age.”

Supported by Georgetown University’s Center for International and Regional Studies (CIRS), Networked Publics and Digital Contention is one of three books Zayani has recently published on the impact of information and communication technologies (ICTs) on state and society in a region that is in the throes of change. His other work includes Bullets and Bulletins: Media and Politics in the Wake of the Arab Uprisings (with Suzi Mirgani; Oxford UP, 2016) and Digital Middle East: State and Society in the Information Age (Oxford UP, 2017).